Right now, across an area of 1,700 square metres, the energy transition can be felt up close. Yet the location might come as something of a surprise – Astana, the capital of Kazakhstan. 4,500 kilometres east of Berlin, Expo 2017, with its slogan ‘Future Energy’, has been under way since 10 June, and will run until 10 September. Inside the well-attended German pavilion one thing is clear – the future has already begun here. The first exhibit, an interactive model of the Kazakh wind farm in Yereymentau, has forged a link between Germany and Kazakhstan. Two hours’ drive north-east of the exhibition grounds there are 22 wind turbines powering the 45 MW system that was connected to the grid in 2015. They came from the German manufacturer, FWT, in the Westerwald. The Kazakh partner, Samruk Energy, wants to expand the system to 300 MW in the medium term.

EXPO 2017 in the Kazakh capital, Astana

The German Energy Dialogue: With the support of the Federal Ministry for Economic Affairs and Energy (BMWi), and in coordination with the German Committee on Eastern European Economic Relations, as well as the Chambers of Commerce Abroad in Central Asia, dena organised the German Energy Dialogue in Astana on 11 and 12 July 2017. The event was held under the patronage of the Ministry for Investment and Development of the Republic of Kazakhstan, and took place during EXPO 2017.

The Expo is certainly not meant to be just a scientific and technological amusement park. Kazakhstan expects long-term effects from the big event in terms of international cooperation, which should expedite its transition to a ‘green economy’, as agreed back in 2013. dena’s ‘German Energy Dialogue’ provided the right opportunity for that. At the high-level event held in the Palace of Independence, German and Kazakh representatives from industry, politics and society explored the potential for establishing interfaces. ‘Step up dialogue, be more specific in the setting of common goals, and actually get business done,’ as Andreas Kuhlmann, Chief Executive of dena, put it at the outset of the mission. On the programme were twelve discussion platforms, more than 70 speakers from both countries, and a visit from the German President, Frank-Walter Steinmeier.

During the ‘German Energy Dialogue’, industry representatives and politicians discussed the energy transition more in terms of ‘how’ than ‘whether’. Topics ranged from smart city plans to green mobility, capacity development and financing models. One message came through loudly and clearly throughout: Kazakhstan can benefit from the German example without copying it. In the words of Andreas Kuhlmann, ‘Not everyone undertaking an energy transition has to do it the same way as us.’ 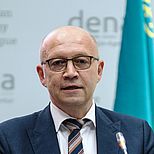 “Not everyone undertaking an energy transition has to do it the same way as us.”

There was broad agreement on the podium, as well in informal exchanges during the breaks, on fundamental issues relating to energy efficiency and renewable energy. There is also backing from politicians. In an address to the nation at the beginning of the year, President Nursultan Nasarbajew declared a ‘third stage of modernisation’. More than anything, the country aspires to being among the world’s 30 leading economies by 2050. For this purpose, back in 2010 the Government approved a programme of accelerated industrial development, driven by innovation, to increase diversification and competitiveness within the economy. The aim? A 25 per cent reduction in energy consumption by 2020.

Why this is so urgent is plain to see. Coal-fired district heating is having a negative environmental impact on Almaty, the biggest city in the country, and occasionally smog can be seen in Astana, too, according to Sanschar Kettebekow, CEO of the Almaty Tech Garden foundation and speaker at the ‘German Energy Dialogue’. So the intention is to increase the proportion of renewable energy sources from around one per cent to three per cent between now and 2020, and to 50 per cent by 2050. ‘Three per cent by 2020 – that doesn’t sound like a lot on the face of it, but in a post-Soviet region it would be quite a considerable achievement,’ says Kettebekow.

The realignment of energy policy is not only ambitious, it’s remarkable. Kazakhstan owes its recent economic growth – which was particularly rapid in the first decade of the new century – to its natural resources. According to government information, its projects involving oil, coal, iron ore, uranium, bauxite, molybdenum, chromium, zinc, gold, silver, lead and copper are all among the 20 biggest in the world. Oil production increased roughly fourfold from 1992 to 2015, while gas production almost tripled. The sale of fossil fuels generates ‘more than 15 per cent of the gross domestic product,’ said Energy Minister, Kanat Bosumbajew, during the ‘German Energy Dialogue’. What’s more, the country’s energy is inexpensive. Nevertheless, Kazakhstan is not content to pay lip service to the issue of decarbonisation.

Astana is a good example of the extent to which the biggest landlocked country on Earth, with just about 18 million inhabitants, is changing and progressing. Where skyscrapers soar up to the sky, where a pedestrian boulevard extends from one end of the city centre to the other, and where no building looks like any other, there was nothing but a steppe a decade or two ago. 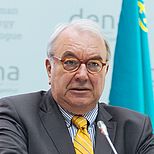 “Our good working relationship with regard to conventional energy sources is a good base from which to extend our cooperation to other areas of the energy sector in the future.”

Now new challenges are emerging from this in terms of how to manage energy. Member of the Kazakh Parliament, Albert Rau, says that real developments in energy efficiency only began in 2010, when specific energy-saving targets were set. As Deputy Minister for Industry and New Technology, and later for Investment and Development, Rau was responsible for their implementation. Now he says, ‘Everything that we’ve achieved in these last seven years is thanks to the help that we’ve had from Germany, and in particular dena.’

dena was commissioned by Kazakhstan’s Ministry for Industry and New Technology to develop recommendations and strategies for carrying out energy audits. The result was Kazakhstan’s 2011 law obliging larger companies to save energy and improve energy efficiency. dena was also involved in the establishment of an energy advisory centre and supported companies in meeting the law’s requirements. dena was also in charge of the first German-Kazakh Energy Forum in 2015, aimed at improving the networking of decision-makers from both countries. Kazakhstan is now by far Germany’s biggest trading partner in Central Asia. Conversely, Kazakhstan is Germany’s fourth-biggest oil supplier, as pointed out by Uwe Beckmeyer, Undersecretary in the Federal Ministry for Economic Affairs and Energy, during the ‘German Energy Dialogue’. You can depend on ‘trust as an asset’. ‘Our good working relationship with regard to conventional energy sources is a good base from which to extend our cooperation to other areas of the energy sector in the future.’

Just how promising Kazakhstan is as an emerging market is something that a number of German companies have known for a long time. Siemens, for example, have been represented here since 1994. Recently, during the course of the Expo, the group signed a memorandum of cooperation with the Kazakh Government, which extends to the production, transportation and distribution of energy. For Siemens, this is not the first project of its kind. The modernisation of street lighting in Almaty, completed this year, enabled savings of almost 50 per cent on energy and running costs. Also, following the conversion of district heating systems in Kazakhstan, energy-efficient pumps resulted in energy savings of up to 80–85 per cent according to Carsten Krumm, Member of the Executive Board of pump manufacturer Wilo and speaker at the ‘German Energy Dialogue’. The company has been operating in Kazakhstan for 18 years now. Stefan Hoffmann, Head of the Viessmann Akademie, has had similar experiences in the area of heating technology. Sometimes leaps in efficiency would be achieved there, ‘the like of which we just don’t experience at home any more’.

Later, in Kazakhstan’s green future, an international centre for green technology is to be built on the grounds of the world exhibition. With the momentum gained from the ‘German Energy Dialogue’, dena will also continue its involvement in the country, as well as its support for the new way of thinking about energy policy through the Initiative EnergieEffizienz Kasachstan (Kazakhstan Energy Efficiency Campaign). A national awareness and motivational campaign on energy efficiency is being prepared in coordination with the Ministry for Investment and Development.

More about the topic

German Energy Dialogue at EXPO in Astana: Germany and Kazakhstan exchange ideas and information on issues relating to the energy industry